Feng Shui and Dowsing: Are They Similar, Related, or Complementary?

I began learning Feng Shui in 2010. I haven’t heard of dowsing until Uncle Dixer mentioned it to me in March of 2017.

Interestingly enough, a couple of weeks later I heard of it mentioned again when I was talking to a friend about her experiences with Feng Shui. She saw a television show that featured a Feng Shui practitioner who was detecting “Feng Shui energies” by holding two metal rods in his hands. She thought it was a Feng Shui practice.

This made me wonder: all this time that I’ve been learning about Feng Shui, how come I’ve never heard of dowsing?

So the next thing that I did was to do some research about dowsing. The information I’ve uncovered led me to think that dowsing is NOT part of Feng Shui, and I am sharing those findings with you here in the first half of this article.

If this is the first time you’ve heard of “dowsing”, here’s a short explanation from Wikipedia as of May 2017:

Dowsing is a type of divination employed in attempts to locate ground water, buried metals or ores, gemstones, oil, gravesites, and many other objects and materials without the use of scientific apparatus. Dowsing is considered a pseudoscience, and there is no scientific evidence that it is any more effective than random chance.

In this article, I will compare and contrast Feng Shui and dowsing. First, you will see how dowsing was used both in ancient times and today. I will then use that information to compare dowsing’s “energy” with Feng Shui’s “Qi” energy. Then, you’ll see why I think dowsing is NOT Feng Shui. However, I do think that it can complement Feng Shui services, assuming that people have gotten solid results from it.

Let’s begin with how dowsing was used in the past.

Dowsing Was Used to Find Water and Metals

In ancient times, dowsing was mainly used to find water sources underneath the earth.

HOWEVER, I do not find these sources 100% credible. I could not cross-verify the information with other academic sources or University Publications. Nor could I find anything that negates those statements.

Aside from using dowsing to find water sources (which was later called “Water Witching”), dowsers claim that it can do many other things, including fortune telling, finding lost items, and communing with the dead.

It is said that only some people have the ability to practice dowsing. Here are some forms of how it was practiced:

L-Rods: These are two L-shaped metal rods held by the dowser in each hand. As the dowser moves around, the rods would turn when water (or other materials) is detected. Skeptics claim that a small wrist twist can send the rod spinning, indicating that the rod movements were fully controlled by the dowser. 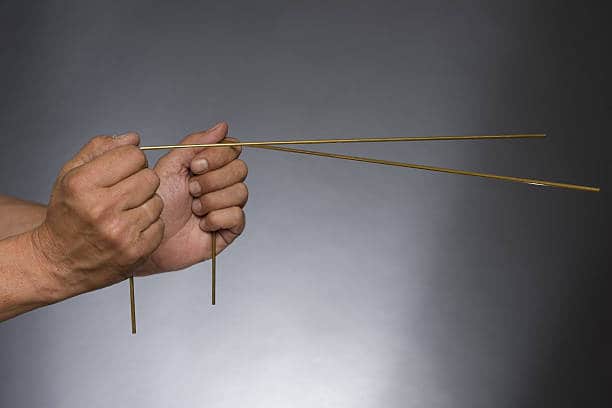 Here’s a video from James Randi about his skepticism on using L-rods for dowsing:

Pendulums: Practitioners would hold the pendulum and ask the pendulum to show you a “yes”, “no”, and “maybe” based on the direction of the swing. The pendulum can swing horizontal, vertical or circular. Practitioners should ask specific questions about the problems with your house.

Modern practices claim that dowsing can detect many unseen energy fields in your life. These include: radio waves, power line disturbances, Geopathic stress pockets, Hartmann Lines, and Curry Lines. These energies are said to interfere with your life.

Because dowsing can detect “energy” and Feng Shui’s purpose to “improve your life”, many Feng Shui practitioners have incorporated dowsing into their practice. Before we get to that, let us determine whether dowsing is a legit practice or not.

Remember the Wikipedia definition mentioned earlier about dowsing being “random chance?” Well, from what you’ve read so far, what do you think?

Take note that, unlike Feng Shui, dowsing has no ancient text or historical records that teach the practice. Ancient civilizations (like China and Egypt) with drawings that suggest dowsing did not pass on this knowledge. Or else we’d probably be practicing them today (like Feng Shui).

That made me wonder: is dowsing legit?

Most Scientists Agree that Dowsing Does Not Work

According to the scientific community, there is no evidence that dowsing works any better than guessing. They did note that there are many generations of people who have been successful water witches.

Another research on Grave Dowsing published by the University of Iowa by William Whittaker, Ph.D, states that:

“Earlier researchers have demonstrated beyond a reasonable doubt that water dowsing does not work. As for grave dowsing, simple household experiments demonstrate that the fundamental principles of grave dowsing are probably incorrect. On the basis of the results from actual sites in Iowa, dowsing is, at best, only as good as common sense intuition at finding graves. One could speculate that dowsing is worse than common sense intuition, since I suspect that most cemetery caretakers have a pretty good sense of where graves are and could do better than the dowsers tested here, but I have no way of quantifying this suspicion.”

There are many other scientists that think the same way. HOWEVER, perhaps the most respected scientist, Albert Einstein, thinks that there is some truth in dowsing: 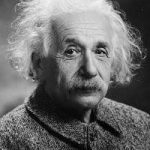 “I know very well that many scientists consider dowsing as they do astrology, as a type of ancient superstition. According to my conviction this is, however, unjustified. The dowsing rod is a simple instrument which shows the reaction of the human nervous system to certain factors which are unknown to us at this time.” – Albert Einstein

Most dowsers agree that the practice is said to work best for people with “special abilities”. This made me mentally connect dowsing practitioners with those who have “special abilities” to see spiritual beings. Those with a stronger sixth sense, maybe?

Further, pendulum dowsing sounds like a supernatural practice, especially the part where you ask the pendulum to show you what’s yes, no, and maybe. It makes me think of Ouija, a spirit board used to communicate with the supernatural.

But it doesn’t matter if it’s supernatural or not. If it works most of the time for those with “special abilities”, then I’d say it is a legit practice. A random chance would not produce results that can have this tradition survive the test of time.

Although such reasoning is faulty because it is “Appeal to Tradition”, I am confident that people would completely give up this practice if it doesn’t yield results. There are too many things in this world that we have yet to understand.

Let us assume dowsing is legit. Is it, therefore, a Feng Shui practice? Are the two related?

From that brief explanation, you probably see that the practice of Feng Shui and dowsing are very different. Using what you’ve read so far, here’s a summary of their main distinctions:

Overall, Feng Shui practice is MUCH bigger and complicated than dowsing. Going back to history, if dowsing was REALLY used in ancient China, how come it wasn’t incorporated into Feng Shui?

But does the Qi of the land equate to the energy that dowsing is looking for?

In my opinion, no. Here’s why.

Feng Shui’s Qi Does NOT Equate to “Energy”

Dowsers say that the pendulum, rods, or whatever tools they use are responding to energy. But what kind of energy?

Today, science has uncovered and categorized all sorts of energies. To name a few, we have magnetic, thermal, nuclear, electric, kinetic, and the list goes on.

Because these energies cannot be seen by the naked eye, most of us began generalizing the forces that cannot be seen into the category of “energy”. And because Feng Shui’s Qi cannot be seen, it is also broadly categorized into “energy”.

I’m here to tell you that not all energies are Feng Shui’s Qi energy. For instance, electricity cannot be seen. An electrician doing his job can hardly be said to be practicing Feng Shui.

Further, the dowsing practice that asks questions to the pendulum has nothing to do with detecting energy. That practice, I would say, is NOT Feng Shui at all.

This assumes that dowsing works and people got great results from it. If so, I would think that this practice can indeed complement a Feng Shui consultation.

According to Feng Shui expert Rodika Tschi, it can be used when (1) you’re solving problems that defy logical explanation, and when (2) you’ve exhausted all logical resources and possible explanations. She claims that dowsing can uncover hidden source of recurring problems at a specific location, such as constant water leakages or chronic mechanical and electrical breakdowns.

If a problem can really be identified AND solved by the practice of dowsing, then I think dowsing can complement a Feng Shui consultation. After all, the goal here is to improve the living conditions of the client.

Some people think that dowsing is a Feng Shui practice. However, I beg to differ. I think they are two completely different and unrelated topics. This misunderstanding comes from the lack of knowledge in Feng Shui, dowsing, and the concept of Qi and energy.

Although dowsing is not part of Feng Shui, I do think that it can be an “added service” to a Feng Shui consultation. This assumes that dowsing is a legit practice that can solve the problem that the client is challenged with. After all, there’s too many mysteries in this world, and Feng Shui cannot solve everything.

What do you think of Feng Shui dowsing? Share your thoughts with us by using the comments below!